The settlement on the territory of present Tajikistan appeared in prehistoric times. Since the VI-IV centuries BC. the provinces of Bactria and Sogdiana were located in this region of Central Asia and composed a part of the Persian Empire.
In the IV century BC. this region was ruled by Alexander of Macedon, who destroyed the Persian Empire. In the II century BC. after the defeat of the Greeks in Bactria, a new state – Tokharistan appeared, which later together with Sogdiana and other regions of Central Asia marked the beginning of great Kushan Empire. The Silk Road, starting in China and India, passed through the west of Tokharistan and led to Greece and Rome. In the V century BC. Sogdiana and Tokharistan were under the authority of the Ephthalites, and in the VI century AD. – under the nomadic Turkic tribes. Around this time, (VI-VII centuries AD.), a lot of principalities appeared, but in the VIII c. BC these principalities were conquered by the Arabs. The present territory of Tajikistan became a part of the Baghdad Caliphate.
In 874 AD. after numerous wars Tajik feudal state under the rule of the Samanids and practically independent of the Arabs formed the Tajik nation.
The common language – Tajik began to dominate. The Samanids were peaceful for about 100 years. It was really a time of revival that gave to the world such brilliant poets as Rudaki and Firdousi.
At the end of the X century the state of the Samanids was captured and divided by the Turkic tribes. In the northern part of Tajikistan the state of the Karakhanids was formed, and the Ghaznavids - in the south. At the beginning of the XII century Central Asia was conquered by Genghis Khan. The territories conquered by him were divided between his sons; the major cultural centers in Central Asia came into possession of the eldest son Chagatai. In the XIV century the most part of present-day Tajikistan became a unit of the empire of Amir Timur (Tamerlane). 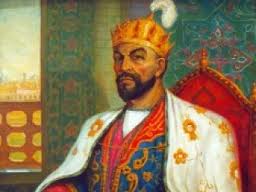 He formed a great power with its capital in Samarkand. In the XVI century it belonged to the state of Bukhara Khanate. In the XVII and XVIII centuries the territory, populated by the Tajiks, belonged to various khanates and states. In 1880, Central Asia was conquered by Russia, and the area, including the northern part of Tajikistan, was proclaimed Turkestan.
After the Socialistic Revolution in Russia in April, 1918, the Turkestan Autonomous Soviet Socialist Republic was proclaimed, and it was considered as a part of the Russian Federation. In October, 1924 Tajik ASSR became the unit of Uzbek SSR. In 1929 Tajikistan became Tajik SSR and a part of the Russian Federation.
Perestroika in the USSR, 1985-1991 generated a wave of democracy and the revival of national traditions. Therefore, by 1991 the Islamic democratic opposition had formed in Tajikistan. After the collapse of the Soviet Union in December 25, 1991 the independent Tajik government was headed by the former secretary of the Communist Party and the Khujand oligarch Rahmon Nabiev, who chose the policy of maneuvering between different political forces.
In 1991, after the breakup of the Soviet Union, the Republic of Tajikistan became an independent state and a member of the Commonwealth of Independent States (CIS).