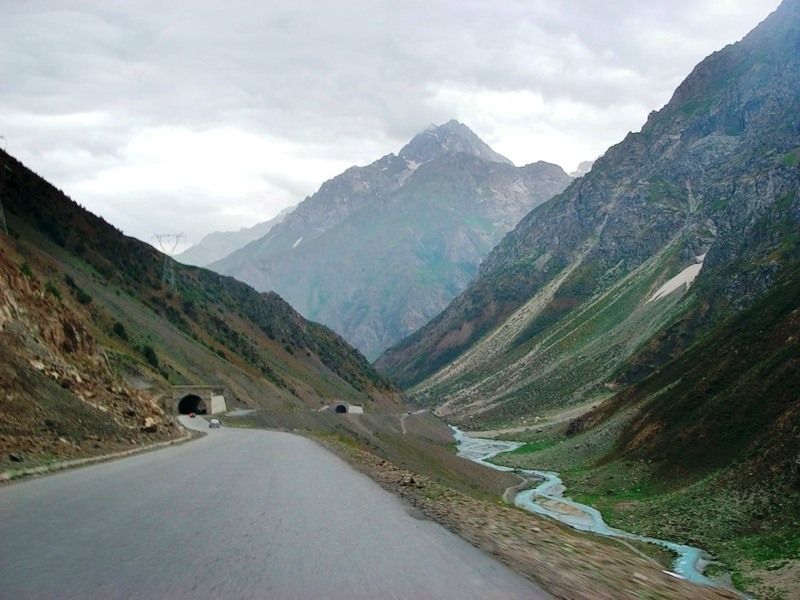 Khujand — the second great and important city in Tajikistan, located in the North of the Republic, in the western part of the Fergana Valley. The city has the ancient history. As many historians and archeologists suppose, the legendary city Alexandria Eschate (Alexandria The Furthest) was built by Alexander of Macedon on the site of today Khujand (V century BC.)
Since the ancient times, Khujand, while being on the crossroad of trade ways of the East, was one of the most important economic, military, strategic and cultural centers of Mawarannahr. The Great Silk Road, connecting ancient Greece, Rome, Asia Minor, Egypt, Iran with India, China and Japan, passed through Mawarannahr.
The old fortress in the city center and the mausoleum of Muslikhiddin sheikh (lived in the XIII century) – holy and spiritual patron of Khujand, are the mostly known among the architectural monuments of the Middle Ages. In the XIX century after the Russian invasion, the city became the  chief town of uyezd, where industry began to develop quickly. The railroad was driven. In Soviet times Khujand (Leninabad in 1936 - 1990) was the center of Leninabad region. Most of famous representatives of the Tajik intelligentsia and republic leaders were born there.
Today the city is a large industrial and cultural center of Tajikistan. Present Khujand is a cozy green city with many parks and gardens, and hospitable inhabitants. The Syrdarya river, running in the center of Khujand and its comfortable banks – is an excellent place for rest and swimming. Khujand is the only one city, located on a wide river.
Among the main places of Khujand the famous city bazaar Panchshanbe is one of the biggest covered bazaars in Central Asia. It attracts visitors with its polychromatic unusual sounds and scents, various fruits and vegetables. Panchshanbe from Tajik is translated as “Thursday”; in former times a large trade was held there at this day.
Monument to Kamol Khujandi 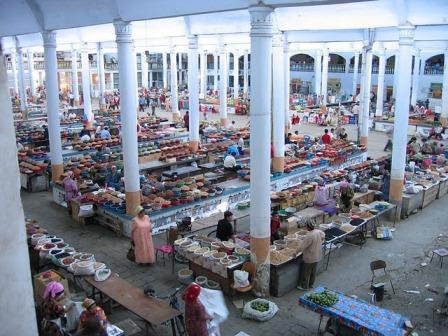 The monument was placed in honor of the 675th anniversary of the poet in 1996. It is situated in the square “Stars of Khujand”. The main idea was to reflect Khujandi’s image as the thinker, philosopher and to show his inner world. The wings, personifying the man’s holiness and at the same time representing the wings of the poetry inspiration are depicted on the background. The poet’s face is directed to the place of his birth and the side of the sunset. The author of the monument is K.N. Nadirov, the painter and sculptor.
Khujand fortress
Khujand fortress is the component part of the fortification city system. It was based in the VI—V centuries BC. According to the facts of the North Tajikistan archeological complex expedition (NTACE), firstly, Khujand fortress was surrounded with the bulk shaft, later – with the thick wall of raw products. The city and the citadel are the compound parts of antique Khujand; they had separate fortified walls, surrounded with a wide and deep moat full of water. The remains of these fortifying were found in the central part of the left bank of Khujand, and they encircle the territory of the old city of 20 hectares.
As the economy, trade, governance and population were developing the city grew. In the VI-VII century a new fortress was built. Medieval consisted of three main parts: the citadel, shakhristan and rabad. The citadel was situated on the bank of the Syr Darya at rabad gate. The medieval Khujand fortress was one of the most fortified in Central Asia.

During the invasion of Genghis Khan (1219-1220) the 25000th army with 50 thousand prisoners from Central Asia was sent to lay a siege in the city. The heroic defense of Khujand fortress and the island located near the Syr Darya River under the leadership of Timurmalik is one of the brightest page in the history of the liberation struggle of the Tajik people. As a result of the Mongol invasion Khujand fortress was ruined. As the historian Khofiz Abru told, at the beginning of the XV century the fortress lay in ruins. According to Zakhiriddin Babur at the end of the XV century the castle was restored and was the residence of the local ruler.
Masdjidi Jami Mosque
The complex of Sheikh Muslikhiddin is a folk monument of the XVI century. It is located on the western side of the square Panchshanbe. The facade of the construction is turned to the street Shark. The mosque was built in 1512-1513. Mullah Mansur (painting), usto Shamsiddin (ganch) and others took part in decorating the mosque. The mosque, in general, has a surprisingly harmonious image and it is a magnificent example of the synthesis of decorative art and structural culture of Khujand.