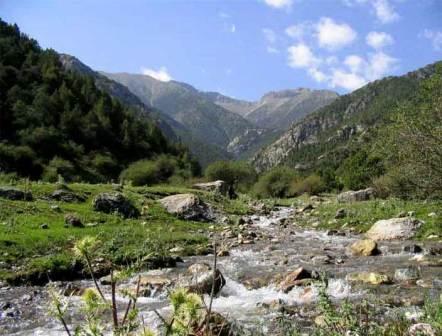 The Pamir Mountains are locally known as Bam-I-Danyan (“World’s roof”, “Pa-mi-ikhr” in Farsi, that can be translated as “the foot of the Sun God”), and once you find yourself in the Pamirs, the origin of these poetic names will immediately appear in the majestic panorama, which will open before your eyes. The Pamirs are the injection, from which the highest mountains in the world branch out, they include the Karakoram and the Himalayas in the South, the Hindu Kush in the West and the Tian Shan in the Northeast. The net of deep and wide valleys lies between mountain peaks up to 7,000 meters and higher, numerous plateau cross the gorges of rapid mountain streams, and the steeps, which are deformed with the titanic forces of the earth shine like a rainbow from the output ledges; but the Pamirs, unfortunately, are too high for human settlement, it is a kingdom of climbers and a snow leopard. The slopes and valleys are inhabited by rare mountain creatures like a wild sheep (urial and arkhar), or a mountain goat (kiik), an elusive snow leopard (ounce) and even more elusive, "the giant snowman" who is told the legends, but not seen by anybody.

The Pamiris, inhabited the mountain valleys, speak many dialects and profess Ismailism – the separated branch of Islam. They do not have any mosques, clericals and any weekly feasts, and their life itself is extremely severe and poor. However, the natural hospitality of local residents with such poor living conditions, amazes many travelers. As the trip to the Pamir region is associated with a number of obstacles (such as the absolute lack of transport and food), it is one of the strongest impressions for those, who experienced this hospitality during travelling the Pamirs.
There are many isolated so-called "shelters" and farms on the mountain routes, and they work as primitive hostels. You will be offered a place under the roof, sheepskin blanket and a hot "sher tea" - tea with a goat milk, salt and butter. To avoid the acute discomfort of the fact that the owner just killed his last chicken, you need to have a supply of food in order to reckon with the owner. There are no any markets in the Pamirs, and money is also of no worth, only barter is in vogue here.