Tajikistan is a multi-ethnic republic. The major part of the population is the Tajik (about 68%). Since the IX - X centuries the Western Iranian language, which became the foundation of the modern Tajik language, had been spreading in Central Asia. Since that time there had been the process of gradual consolidation of various Iranian groups which inhabited Central Asia into a single nation of the Tajik.
High rate of the population growth is the characteristic feature for the present-day Tajikistan: since the 20-s the number of inhabitants of the republic has been growing by almost 6 times. It is a result of high birthrate and declining death rate in the XX century. Most families in Tajikistan are families of many children.
The territory of Tajikistan – is one of the centers of world civilization. In the I millennium BC. the East-Iranian people lived here. In the IV BC. Alexander of Macedon made a campaign against Central Asia. His name is associated with many legends. At the end of the VII century –beginning of the VIII century the states, situated on the territory of today Tajikistan, were conquered by the Arabs. The flourishing of political and cultural power fell to the epoch of the Samanid and Takhirid dynasties (IX - X centuries). There were many small principalities in Tajikistan during the subsequent period. In 1868 the northern part of Tajikistan was won by the Russian. In 1929 the Tajik Soviet Socialist Republic was formed. In 1991, the independence of Tajikistan was proclaimed.
The religious Tajiks, Uzbeks, Kyrgiz, Turkmen and some other nationalities of modern Tajikistan are mostly Sunni Muslims of Hanafi persuasion. 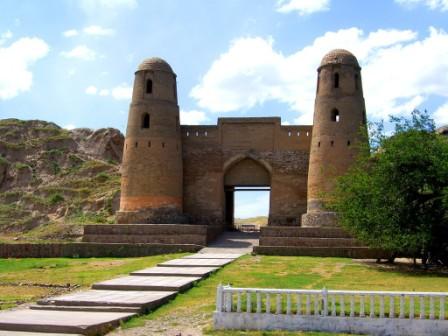 Tajikistan is known for many sights of ancient history and culture. There are unique monuments among them. One of them is the city Penjikent located in the north of the republic, in the valley of the Zarafshan river. In the V - VIII centuries, before the Arabian conquest, Penjikent was the center of one Sogdian principality. Here archaeologists found remains of houses and public buildings, the citadel with the palace, the necropolis, beautiful wall paintings (scenes from the life of the local community before the arrival of the Arabs in Central Asia).The museum-reserve was formed at the archaeological site. Not far from Penjikent, on the Mug Mountain the Penjikent ruler’s archive of documents, written in the Sogdian language, was found. The decryption of these documents allows to reason about social, economical and political life of the population of Central Asia in the VIII century. In the south of Tajikistan, in the borough Adzhinatepe, near the town of Kurgan-Tube, the archaeologists found traces of the ancient Buddhist monastery of the VII - VIII centuries, including the 12-meters figure of the lying Buddha. High mountains, difficult and dangerous for climbing slopes, glaciers - all this in Tajikistan attracts sportsmen and athletes.
The Legislative power is under the authority of the Parliament – Majlisi Oliy (Supreme Assembly), and the Executive power is under the authority of the President. The President forms the government with the concurrence of the Parliament. There are many political parties and associations in the Republic.