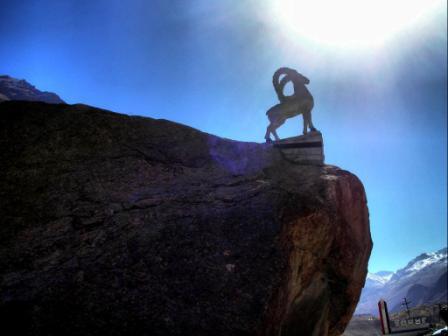 Khorog is the administrative center of the Gorno-Badakhshan Autonomous Province (GBAO). Khorog got its status in 1932. Before there were 2 villages. The connection between them was with the help of mountain paths. The valley in this place is very narrow, that is why the city is the only one street. Khorog is located at the bottom of the canyon at an altitude of 2200 meters, where the Pyanj, Gunt and Shakhdara Rivers meet, near the border with Afghanistan; the Pamir highway runs across the city center. Thanks to the fact, that the city is in the deep canyon, it is protected from strong winds and cold temperature in winter; summer is warm and dry.
The population of the city is about 30000 people, generally from the Pamir ethnic groups.
Most transport routes in Badakhshan, including the Pamir Highway in the North of Dushanbe and in the West of the city Murgaba, China and Kyrgyzstan pass across Khorog. The earth road passes through the Wakhan valley Alichur. Another path leads to the East across the Shakhdara valley to Karl Marx and Engels Peak.
There is a small airport in Khorog, it is equipped with light-sized propeller-driven airplanes, which make regular flights to Dushanbe and other cities several times in a week. It is the only one constant airport in the Gorno-Badakhshan Autonomous Province.
Today Khorog is the regional center of management, trade, transport, and of course, education. Such higher educational establishments as a new branch of the Central Asian University, Khorog State University and the Lyceum of Aga-Khan fund (spiritual leader of the Ismailism community) function here. The inhabitants of the city stand out with their high level of education against other Tajiks.
Khorog is a beautiful and green city with high poplars and unusual traditional Pamir houses on the outskirts of the city. Despite the fact that the standard of living in the city is not high, in recent years several new hotels and guest houses, as well as internet cafes and restaurants of the Tajik cuisine have been built here.

The city has quite quite typical region constructions for Central Asian, they combine  traditional Pamir houses and Soviet-style buildings. The city center is completely composed of Soviet buildings, quite common, but along the river and the hills above the city many unique and colorful Tajik houses with large terraces are built.
The number of tourists, going to visit the city along the Pamir highway, increases from year to year.