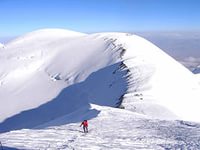 Lenin Peak is one of the highest mountain peaks in the Pamirs, located on the border of Kyrgyzstan and Tajikistan, in Zaalaskiy Range. Height of the peak is 7134 meters. The first descriptions of the top were made by the outstanding Russian traveler A.P. Fedchenko in 1871. I t was known as Kaufman peak until 1928, after it was renamed toLenin Peak. This year there were made the first climbing by German alpinists. There is a plateau on the top of the peak. The climate is continental.Sumeris short and cold. The daily temperature is so unstable that can vary from +50 degrees Celsius till -30 degree.

Lenin Peak is a huge array, from the northern and southern slopes of which run down a lot of glaciers:Lenin Peak(length 13.5 km) Large Saukdara (20.6 km). Northern and southern slopes are very dangerous, so most of the researchers avoid it. The best time for climbing is August month. On the one hand,Lenin Peakis the most affordable among mountain peaks and does not require any special technical preparations. In spite of this, it is necessary to take into account the low air temperature and other dangers while climbing.

ZaalaiskiyRangeis famous for its peaks. There is a beautifulAlaiValleyin the area ofLenin Peak. The length of the valley is135 km. Local people adhere the tradition of nomads. Here you can visit the shepherd's yurt, taste ayran, get acquainted with the ancient culture of the Tajik people. Every yearLenin Peakis visited not only by experienced climbers, but also lovers of high-altitude mountaineering.