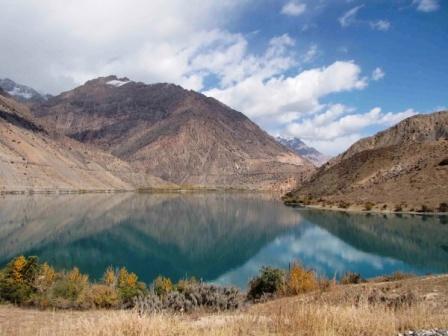 The Iskanderkul lake is situated in the Fann Mountains, in the separated mountain region, which is located in the North of Tajikistan, between the Gissar and Zeravshan ranges of the Pamir-Alay, at an altitude of 2200 meters.
As the legends tell, the Iskanderkul lake got its name in honor of Alexander the Great, who in the East was known as Iskander Zulkarnay (two-horned Iskander). The word “Kul” means “lake”, hence “Iskanderkul” appeared.  Alexander of Macedon supposedly was here on his way from Central Asia to India.
There are two legends about appearing this lake. The first legend tells that during the Indian march Alexander the Great came across the settlement, which didn’t want to give up. Then he ordered to direct the riverbeds on this settlement and to drown it. As a result the lake appeared.
Another legend is more poetic. It tells that during the halt near this lake, the horse of Alexander, Bucephalus, drank ice water and caught cold. After recovering Bucephalus, pasturing on the shore, suddenly neighed, jumped on the highest rock and plunged into the water of the lake. Alexander became sad, and after some days he withdrew the army further. On the shore he left grooms and soldiers. Since that time every month during the full moon Bucephalus has begun to pasture, the waters of the lake part and the white horse in accompany of grooms goes out on the surface.

The lake has an oval form, it is dammed up with moraine and covered with rocks. It is a result of the landslip, perhaps, after the strong earthquake.
The total surface area of the lake is 3.4 km ², the depth of the lake is 72 meters. According to scientists, in ancient times the lake had a higher water level, traces of which can be seen on the slopes of the surrounding mountains, at an altitude of 120 meters.
The lake is formed by the waters of four rivers flowing into it: Hozormech, Seridevol, Saritag and Serima. They originate from the snowfields and glaciers of the Gissar Range. In the south-western part the Cave key, coming from the rocks near the lake in the form of powerful flow, falls into the lake.
The placid calm of the magic lake Iskanderkul gives the philosophical thoughts about the eternal. The picturesque landscape surrounds the lake. The mountains seem multicoloured, as bluish, reddish and purple colors prevail. Clear cool autumn air is energizing and bracing. Around the lake Iskanderkul there are many scenic mountain routes.